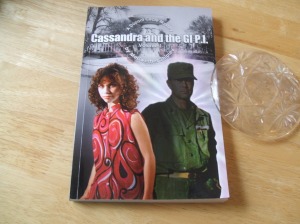 Book reading/signing with Meriwether Shipley, author of Cassandra and the PI G. I. on Friday, 24 April 2015 from 7-8 pm at the Warren FoodWorks, 108 S. Main St. Warrenton, NC 252-257-1239.
Ms Shipley will be reading excerpts from her book, answering questions, and signing your book or you may purchase one at $8.95 on site.
Ms Shipley has worn many hats in her long career. She (and Cassandra) both majored in Interior Design at the American University. She has been a Model for such companies as Walmart, Wrangler, and Home Depot, being featured in an ad for Eli Lilly that ran for five years. She is most comfortable behind the scenes where she has been a producer and director for stage and film for a quarter of a century. She and her husband, Jack Peachum wrote, produced, and directed an independent film titled Vignette. They have co-authored works for both stage and screen. Ms Shipley has been a feature writer and columnist for two newspapers.
She is a regular attendant at First Friday Poetry Nights at the Warren FoodWorks
This is her first novel; Volume I in a series to follow.

This site uses Akismet to reduce spam. Learn how your comment data is processed.

THE LITTLE THINGS IN LIFE SHOULD BE CELEBRATED THE MOST

This Jane Austen blog brings Jane Austen, her novels, and the Regency Period alive through food, dress, social customs, and other 19th C. historical details related to this topic.

Hunting for the Very Best

indispensable poetry from women over 50

Come view the world from my loft

I am not here to convince you of anything, I am just sharing my personal experiences

An independent publishing company, we also offer services from writing and editing to representation and film.

You Don't Mess Around With Jane