PSYCHIC DEVELOPMENT IN THE LINEAGE 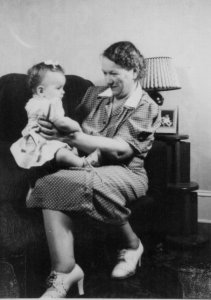 The photo shows Grandmother Elizabeth Urbanski Daniels (my mother’s mother) holding me approximately one year before she passed away. No stories have come to me about anyone before her in her birth line being psychically developed. She certainly was. My mother didn’t tell me about this until I was nearly 30 years old. I’d had some out of body experiences of my own, but Mom didn’t know that. She never knew it because I never told her. Mom had a habit of belittling me, so I wasn’t about to confide anything at all to her.

Grandmother Elizabeth (as she was referred to, never Grandma) read tarot cards. She was good at it. My mother was developed as far as my two brothers and I was concerned. She always knew before I did, when I was pregnant. I’m talking about within days. With my brother Bob, it was instant. In her later years, she lived in Ft. Lauderdale, Florida but knew instantly when Bob’s car was in an accident in New Jersey. She called on the phone within minutes after it happened. The car was empty. Bob was in the house with me at the time.

This site uses Akismet to reduce spam. Learn how your comment data is processed.

Come view the world from my loft

I am not here to convince you of anything, I am just sharing my personal experiences

Tales from the mouth of a wolf

An independent publishing company, we also offer services from writing and editing to representation and film.

You Don't Mess Around With Jane

Leaf of the Tree

Finding the Divine in the Details

This WordPress.com site is about books, writing and the paranormal.